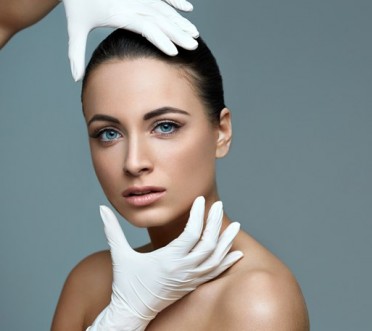 You are a good candidate for a Facelift, if…

- You are generally healthy, without any uncorrected medical condition which could impair healing

- You have sagging cheeks & deep visible lines around the nose

- You have a positive outlook and realistic expectations

- You are preferably a Non-smoker

What does the procedure achieve?

A Facelift or Rhytidectomy is a surgical procedure that improves visible signs of aging in the face and neck, such as:

- Jowls developing in the lower cheeks and along the jawline

Any patient who is physically and mentally healthy and wants to rejuvenate their face and neck to achieve a youthful look is an eligible candidate. Patients with uncontrolled medical conditions, taking blood thinners, chronic smokers or with cardiac ailment must approach this surgery with extreme caution 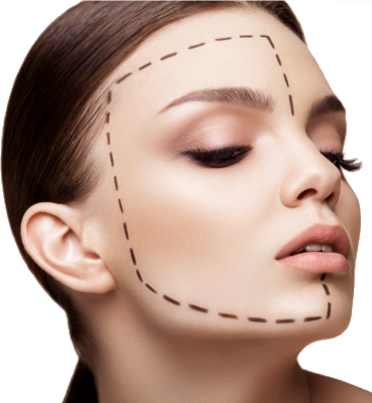 During your facelift consultation be prepared to discuss:

- Your surgeon will also:

- Discuss your facelift options based on your unique aging process

- Examine and measure your face

- Take photographs for documentation and planning

- Recommend a course of treatment

- Discuss the type of anaesthesia that will be used

The procedure commonly takes 3- 4 hours. However, the procedure may take longer depending on additional procedures (blepharoplasty, brow lift, fat transfer, lip lift, chin augmentation etc) that may be done simultaneously.

In preparing for a facelift, you may be asked to:

Depending on the degree of change you'd like to see, your facelift choices include a traditional facelift, limited incision/short scar facelift and/or a neck lift.

A traditional facelift incision often begins in the hairline at the temples, continues vertically down immediately in front of the ear along a natural skin crease, then around the ear and ends in the lower scalp behind the ear. Fat may be sculpted or redistributed in the face, jowls and neck and underlying tissue is repositioned, commonly the deeper layers of the face and the muscles are lifted and re-anchored in a higher position. Skin is then re-draped over the uplifted contours and excess skin is trimmed away.A second incision under the chin may be necessary to further improve an aging neck. Sutures (absorbable or non-absorbable) or skin adhesives are used to close the incisions.

An alternative to a traditional facelift uses shorter incisions at the temples, continuing only upto the earlobe. "Mini-lifts" are usually reserved for patients with early changes of aging and less skin sagging.

A variety of other procedures can further enhance the outcome of a facelift. They include:

A necklift addresses the loose neck skin, vertical bands in the front of the neck  and fat accumulation under the chin. The anterior incision is just under the chin and tightens the gap in the thin sheet of neck muscle and repairs the muscle corset. The posterior neck lift incision often begins in front of the ear lobe and wraps around behind the ear and ends in the posterior hair behind the ear, pulling the excess neck skin up and behind the ear, where it is trimmed off and sutured meticulously .

All incisions will be closed with sutures that may dissolve or sutures which may need to be removed after a few days. Some surgeons use skin glues to seal the incisions. Once healed, the incision lines from a facelift are well concealed within the hairline and in the natural contours of the face and ear.

Following a facelift, a lightly compressive  bandage will be placed around your face to control swelling and bruising. Small suctiontube drains may be present for 24 hours behind the ears to draw off any excess blood or fluid.

You will be given specific instructions on how to care for the surgical site and drains, medications to apply or take orally, specific concerns to look for at the surgical site or in your general health and when to follow up with your plastic surgeon.

Swelling and bruising should be anticipated and can last for 1-2 weeks. Sutures (stitches) are generally removed at 1 week. Most patients look fairly well after 2 weeks, but the final result from facelift surgery is evaluated 4-6 months later. Numbness and firmness persist for several months but do not affect appearance. Light exercise is permitted at 3-4 weeks and vigorous exercise can be resumed 6 weeks after surgery.

What are the risks of facelift surgery?

Facelift risks, while rare, include:

What results should I expect after a facelift?

While most people are presentable to the public within 10-14 days, it will take 2-3 months for the face to feel "back to normal" in terms of texture, sensibility and loss of tightness.

Continuing daily sun protection and a healthy lifestyle will help extend the results of your facelift.

As swelling and bruising subside, the visible improvements of a facelift appear. Your final result should not only provide a more youthful and rested appearance, but also help you feel more confident about yourself.Follow your surgeon’s instructions to ensure the success of your surgery.

What questions should I ask my plastic surgeon about facelift surgery?

A checklist for your facelift consultation:

- Are you a certified plastic surgeon?

- Were you specifically trained in the field of plastic surgery?

- How many years of plastic surgery training have you had?

- Am I a good candidate for this procedure?

- What will be expected of me to get the best results?

- Where and how will you perform my procedure?

- What surgical technique is recommended for me?

- How long of a recovery period can I expect, and what kind of help will I need during my recovery?

- What are the risks and complications associated with a facelift?

- How are complications handled?

- How can I expect my face to look over time?

- What are my options if I am dissatisfied with the cosmetic outcome of my facelift?

- Do you have before-and-after photos I can look at for this procedure and what results are reasonable for me?